Blowin' in the Wind

And I am so excited about getting to post on Fun Friday, having just returned one week ago from an incredible month long vacation in the San Juan Islands then hopping on up to the Canadian Gulf Islands. For this once-in-a-lifetime adventure, I can give all the glory to my Heavenly Father for arranging it…completely complimentary to Ron and I via his brother and his wife who own the yacht!

I saw sights I never would have dreamed I'd see and got to do so many
fun firsts, too! I’d never flown “first class” (flew to Seattle that way and wrote THE END on The Bedwarmer’s Son on the plane!). Never been on a cruise. Never been on the Pacific. Never flown in a small airplane. Never sang Karoke (I KNOW! Can you believe it?) Never had a passport before. Never been to Canada. Never got seasick (Praise the Lord!)

After three ER visits followed by three admissions earlier this year. I was getting the message, God wanted me to slow down. Then this trip came up. I figured things were surely looking up! :)

Now y’all know I’m a busy author lady :) with lots of things to do. New Covers and Reveal Party - August 16th 10.am. CDT with CelebrateLit! And New Releases - The Bedwarmer’s Son coming in September with its CelebrateLit Blog Tour September through the )…but I thought I’d be fine…able to work online a little in the evenings when we moored into ports along the way.


What a shocker to discover the marinas—though wifi was advertised—had terrible reception and connections…much to my dismay.

But we are to rejoice in the Lord always, right? So I did. I mean, every day held new adventures and so much to see and do. I got more exercise than in the whole of last year, I’m sure.  When you’re on a boat, and you dock, to go anywhere, it’s on foot! Though I got way off my weight loss program, I only gained five pounds of the seventy-five I’ve lost this past year! Thanks to all the hoofin’ it, I’m certain!

But, the answer, my friend, is blowing in the wind...the answer is blowing in the wind :) And so is my hair here. The temperatures were in the 40s at night and 60s during the days--much better than the 100 degree Texas days we missed! And there was always a stiff breeze. I usually kept my hair twisted so it wouldn't tangle. But here...well...it tangled! :)

I pray you all are given the opportunity to go and see and do things you never imagined. And I covet your prayers that I will be obedient and slow down and get more rest! Oh! And I did get thirteen chapters written of Covering Love, book eight in my historical Texas Romance series written on the boat! ;)
I want to testify that God is good ALL the time!

So what have you been doing so far this summer?

Bio: Caryl McAdoo loves God and currently writes four Christian series: the historical ‘Texas Romance’ family saga; a contemporary ‘Red River Romance’; The Generations, her Biblical fiction, and the newest Days of Dread Trilogy for mid-grade readers. A.K.A. the “Singing Pray-er” loves praising with new songs the Lord gives her and prays her story gives God glory! In 2008, she and high school sweetheart-husband Ron moved from DFW to the woods of Red River County. Caryl counts four children and sixteen grandsugars life’s biggest blessings, believing all good things come from the Lord. Besides glorifying Him, she hopes each title also ministers His love, mercy, and grace to its readers. The McAdoos live in Clarksville, the county seat, in the far northeast corner of the Lone Star State with two grandsons. 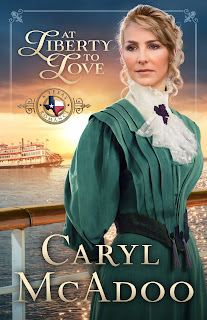 Latest release: AT LIBERTY TO LOVE, book 7, Texas Romance series / Obedience is better than sacrifice…and trumps romance, no matter how sweet. Profound loneliness propels a childless widow west with the idea of choosing an orphan to share her life. On the way, a fellow traveler takes her by surprise. She never dreams, is unprepared, doesn’t need another man, but can’t get him out of her head…or heart. He’s so perfect—every bit the one she’d searched for as a young woman—except his mistrust of God has erected a wall she cannot breach.
Marcus Ford blames God and struggles for peace after losing his wife and baby. Not once has he considered another woman could be the answer, but the widow is like none other he’s ever met. He falls hard, but plans are taking him east. Hope dashed sends two hearts into the pit. If only Ford could forgive God or the widow ease up on her adamant resolve.
Will God’s mercy shine a beacon in the fog of despair and prove sufficient to heal their souls?