There are probably few people who have never heard of Winnie the Pooh. But did you realize the cuddly little bear’s life began long before he joined Walt Disney’s company of characters?

Alan Alexander Milne was born in the Kilburn area of London on January 18, 1882 (138 years ago!). He attended college on a mathematics scholarship, receiving his BA in the subject in 1903. During his time at school he and his brother collaborated on articles for the student paper and came to the attention of the editors of Punch humor magazine. He became a regular contributor and later an editor for the publication.

His writing career was put on hold during The Great War when he joined the Royal Warwickshire Regiment of the British Army. Injured during the Battle of the Somme, he invalided out then was recruited to write propaganda for MI7, finally being discharged in 1920.

Back at his desk, the next few years were highly productive, and he published eighteen plays and three books. (including one detective novel). The movie industry was just getting started, and Milne became affiliated with Leslie Howard’s company Minerva films, writing four screenplays for the actor/producer.

Life changed personally and professionally for Milne when his son Christopher Robin was born in 1920. The author continued to publish plays, but he now made up stories for his young son, incorporating the boy into the plot lines as well as the youngster’s stuffed animals, including a beloved stuffed bear initially named Edward. The toy was renamed Winnie when a black bear mascot from the First World War was left to the London Zoo. 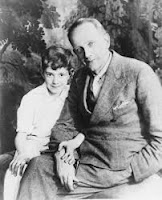 Winnie first appeared in a poem called Teddy Bear, later republished in When We Were Young. Three more books were published, and Milne’s popularity as an author skyrocketed. He continued to write plays and movie scripts, but Winnie the Pooh’s success overshadow all of this work.

Unfortunately, success came at a price, and the real Christopher Robin resented the limelight, later stating that his father exploited his childhood. The family became estranged. Christopher visited his father occasionally during the last years of the author’s life, but did not see his mother at all in the fifteen years before she died.

After Milne’s death, his widow sold her rights to Stephen Slesinger, an American radio, TV, and film producer who also created comic book characters. Shortly after his death, Slesinger’s widow sold the rights to Walt Disney, and the rest is history.

Linda Shenton Matchett writes about ordinary people who did extraordinary things in days gone by. Her latest release, Under Ground, features WWII war correspondent, Ruth Brown. A volunteer docent and archivist for the Wright Museum of WWII, Linda is also a trustee for her local public library. She was born a stone’s throw from Fort McHenry and has lived in historic places all her life. Now located in central New Hampshire, Linda’s favorite activities include exploring historic sites and immersing herself in the imaginary worlds created by other authors. Visit her website where she blogs about history, mystery, and faith. Sign up for her newsletter and receive a free short story. You can also connect with Linda on Facebook, Twitter, and Pinterest.