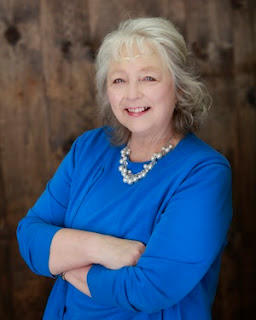 An award-winning writer and frequent conference speaker, Shirley Raye Redmond is the author of three inspirational novels, PRUDENCE PURSUED, VIPER’S NEST, and AMANDA’S BEAU, as well as two dozen children’s books. Shirley Raye holds an M.A. in literature and teaches part time through the Institute of Children’s Literature. She has been married to her college sweetheart for forty-five years. They live in New Mexico and are blessed with two grown children and four adorable grandchildren. 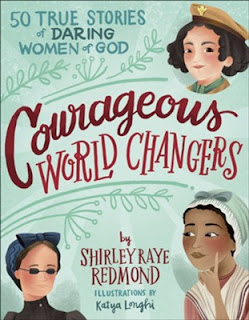 Backcover copy of Courageous World Changers: Meet women who have used their God-given talents to live out their faith to the fullest. They come from a variety of backgrounds, eras, and ethnicities, but each one has answered the Lord’s call on their life in bold and innovative ways.
Children of all ages will be inspired by the stories of


These inspiring profiles will captivate kids’ imaginations and encourage them to discover their own gifts and how they can use them to glorify God.

These and the 45 other female spiritual role models featured in this book have made a profound impact on the world around them, and in many cases changed the course of history. Strong, smart, and sometimes outspoken, these women are tremendous examples of God’s love in action.

Heidi here. Shirley, congratulations on CourageousWorld Changers! Tell us what prompted you to write this book?

I had just finished reading 7 Women and the Secret of Their Greatness by Eric Metaxes. The seven Christian women profiled in the book lived their faith boldly, and I was so inspired by their biographies.  I made a comment to my husband how I would love to write a book like this for girls. Shortly after that, my agent contacted me saying Harvest House was looking for such a book for kids. She wanted to know if I’d like to submit a book proposal. So I did. I want girls to see—in the words of Christian convert Pandita Ramabai that, “A life committed to Christ has nothing to fear, nothing to lose, and nothing to regret.”

Who/What spurs you to write? Where do your story and character ideas come from?

I have always wanted to write from the time I was 12-year-old. I had my first newspaper article published when I was still in high school. Ideas come from everywhere. The seed for my first novel, Stone of the Sun (romantic suspense) sprouted while I was watching a re-enactment of the shoot-out at the OK Corral in Tombstone, Arizona. Pigeon Hero! (Simon & Schuster) came to life after I watched a special about World War II messenger pigeons on the History Channel. I keep a recipe box filled with index cards on which I write down ideas—some fictional and others nonfiction, some for books and some for articles, essays or devotions. I’m never at a loss about what to write next. There are plenty of ideas to chose from.

What do you consider the greatest moment of your writing/publishing career?

Oh, that’s so hard to say. Each “first” has been so exciting: my first article, my first novel, my first children’s book (which later became a Weekly Reader selection), my first writing award, signing with my first literary agent. When Lewis & Clark: A Prairie Dog for the President (Random House) was chosen to be a Children’s Book of the Month club selection, I was over the moon. The first time I received a hefty 5-figure offer for textbook rights for one of my children’ books, I did a happy dance in the living room—literally. Even receiving my first fan letter was a thrill. Every first has been a blessing to me.

Congratulations on your great publishing success! Time for a fun question: You are alone and stranded on a desert island and can have ONE food product and ONE drink, what would they be?

That’s too hard! I love food. But I can’t go very long without iced tea or Dr. Pepper and those little orange cheese crackers that come in a box—I fear I’m addicted to them. J


Well, I must admit I am not a fan of those little orange cheese crackers ~ I'd go with diet pepsi and chocolate (though I could easily survive on cheese, popcorn, and chocolate). But, back to you.....What drew you to these particular fifty women?

Faithful Christian women are salt and light in their communities. They all make a difference. But some have such a vibrant faith that—like a stone tossed into a pond— their influence ripples throughout the world. The fifty women included in this book fall into that category. They were (and are) full of courage because they were (are) persuaded that Jesus is Lord. In the Greek, that’s what faithfulness means—“persuaded.” Faith is not a mushy sentimental feeling. It’s a head thing. The word courage comes from the Old French word corage meaning “heart.”
One cannot have the mental or moral courage to stand up against fear and trials unless one is first fully persuaded there is a reason to do so. In this case, the head rules the heart. How else could Corrie ten Boom survive her ordeal in the Nazi prison camp? If not fully persuaded that Christ was real why would Mahalia Jackson dedicate her singing career to Him? How else could Josephine Butler endure being smeared with dung by an angry mob? Why was Bethany Hamilton brave enough to venture back into the ocean after her shark attack? Their faithfulness should encourage us all.


Thank you for sharing that inspiration for the book. Finally, how do your faith and spiritual life play into the picture and affect your storytelling?

To quote author Madeleine L’Engle, “Jesus was God, who told stories.”  So we follow in His footsteps when we’re creative in this way. With Courageous World Changers, I hope to increase the faith of growing Christians and to inspire hope in the hearts (and minds) of those who struggle. The book contains fifty biographies of amazing, gutsy Christian women. I hope reading about them will encourage others to keep running the good race.

Shirley, thank you for sharing with us! Touch base with Shirley at shirleyrayeredmond.com or Facebook