Ozzie and Harriet and the Big Band Era

CBS launched the radio program, The Adventures of Ozzie and Harriet in October 1944, having unsuccessfully tried to fill the void left in their program lineup by the loss of Red Skelton to the military in March. Over 400 episodes were produced during its ten-year reign as one of the most popular shows on the air.

However, long before the couple appeared on radio and then television, Ozzie was a band leader. He formed The Ozzie Nelson Band in the late 1920s and had limited success. Some believe his big break came in when he helped himself to discarded issues of the New York Daily Mirror and had band members and their families “stuff the ballot box” with votes for themselves as the newspaper’s favorite band. True or not, in 1930 the band was thrust in the public eye and they became well-known throughout the nation. 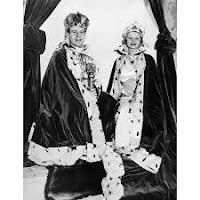 They began to record prolifically with Ozzie as the primary vocalist. By 1935, the band had a number one hit “And Then Some,” and he married the band’s other star vocalist Harried Hilliard. By 1940, the couple had two children, so Ozzie was looking for a way to spend more time with his young family.

Ozzie and Harriet regularly appeared on Red Skelton’s radio program, The Raleigh Cigarette Program. (In those days, shows were often named for the sponsors rather than the stars.) Ozzie came up with the idea to feature his family on the radio and began to write scripts, so when word trickled through the industry that CBS was looking to add a program, Ozzie raised his hand. 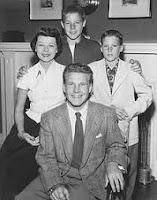 Sons David and Ricky were played by actors on the radio program (ages 8 and 4 respectively), but played themselves once the Adventures moved to television in 1949. The radio version continued for another two years. America sat in fascination and listened as Ozzie and Harriet raised their boys on the airwaves. By all accounts, Ozzie was very hands on with producing and directing most of the episode, many of which he also wrote.

Did you know Ozzie and Harriet were part of the Big Band era?


Here is a clip from one of their performances: https://www.youtube.com/watch?v=-rGctmBJjr0

Linda Shenton Matchett is an author, speaker, and history geek. A native of Baltimore, Maryland, she was born a stone's throw from Fort McHenry and has lived in history places all her life. Linda is a member of ACFW, RWA, and Sisters in Crime. She is a volunteer docent and archivist for the Wright Museum of WWII. To find out more about Linda and her books, including her most recent release Love's Allegiance, visit her website. Receive a free short story when you sign up for her newsletter.
Posted by Linda Matchett at 1:30 AM