Our Friends, the Enemy

Five years ago when I was doing research for my historical romantic suspense series, Intrigue under Western Skies, I discovered one of those tidbits I knew had to be used in one of the books. The series is set in Nebraska during the 1880s, so any time I ran across any mention of Nebraska history, I took notice. Little did I suspect that I’d find a connection between my home county in Georgia to the Nebraska prairie. But it wasn’t until I’d published three books, the plot came to me, and gave me a chance to recognize one of the unsung peacemakers of the post Civil War era.

The people for years after the Civil War were just as divided as today. Hatred was just as strong as before the war. Then P. H. Fitzgerald, a former Union soldier and Indiana publisher, had a vision of a town where soldiers of both North and South would settle. The idea was that if they became neighbors, they’d forget their differences. He located a stretch of land straddling Wilcox and Irwin Counties in South Georgia. The land was warm and plush and cheap, dotted with small farms of corn and cotton and peach orchards. This is the Wilcox County courthouse where the trial is set in Book 4, Escaped. 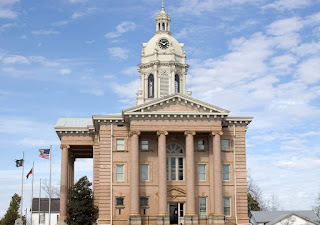 In the late 1880s, a famine swept parts of Nebraska, and Mr. Fitzgerald had his former Northern ex-union soldiers willing to move South and help settle a new town alongside the locals. He set up a Colony Company and sent out a call for donations, then purchased 40,000 acres between the Ocmulgee River and the community of Swan. Tracts of land were doled out to the settlers, tradesmen and farmers alike.

Oh, and Mr. Fitzgerald offered his sponsors an invitation to come and check out the land for themselves. Enter my hero, Jake, who is sent by his boss to scout out the land for the Nebraska settlers. Juliette, my heroine, lives with her family at the north end of this land, near Oscewichee Springs. This is an old abandoned farmhouse located in the area like Juliette's home. 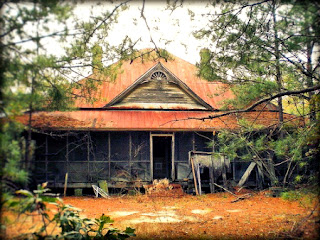 During my childhood, my family and friends would go to the springs nearly every weekend for picnics and swimming. There was a big dance hall there in those days. During the 1880s, it was totally wild, of course, but I know the area well enough to describe how it must have been. The springs were ice-cold. In fact, the area, called Forest Glen, was so thick with trees and vegetation, once you turned off onto the dirt road on the way to the springs, the temperature dropped at least twenty degrees. The water was crystal clear and bubbled from the springs along a gently flowing stream with shallow wading spots and deep swimming holes, the banks moss covered. It was a delightful place during the hot, muggy summers. Here is the Ocmulgee River located about a mile from my childhood home. 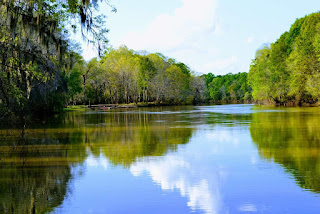 Mr. Fitzgerald’s dream came true, and Fitzgerald, Georgia, was incorporated in 1896. Called the Colony City, it still has the Blue and Gray Museum in operation. The streets are named for both Union and Confederate generals, and Lee and Grant Streets intersect at the main business district. The town's motto is "Our Friends, the Enemy"

How I wish we had peacemakers like Mr. Fitzgerald today, and people of differing political beliefs who could live together and love their neighbors. 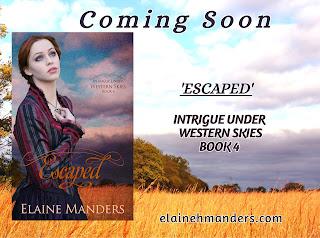 Posted by stitchesthrutime at 12:00 AM