Does the word “Carpetbagger” bring your thoughts to the Civil War? It does to me, so I was intrigued as to why an operation designed to help the Allies seventy-five years ago this month would carry that tag. As it turns out, one of the definitions of the word is “a person perceived as an unscrupulous opportunist,” with opportunist being the key word.

By 1943, the war was still grinding on. Resistance fighters across Europe were doing their bit to sabotage Axis efforts, but supplies were becoming scarce, especially in France, Italy, and the Low Countries (Belgium, the Netherlands, and Luxembourg).

Two squadrons were put under the control of the Office of Strategic Services (precursor to the CIA). To prepare for the missions, B-24 Liberator bombers (another appropriate name!) were modified by removing the belly turret, nose guns, and any unnecessary equipment to provide more cargo space and speed. Blackout curtains replaced the waist guns, and cockpit windows were extended (referred to as “blisters” in a couple of references) to give the pilot and co-pilot great visibility. The planes were painted glossy black which enabled them to evade search lights.

Flights only occurred on moonlit nights, and navigation done by visual cues (rivers, lakes, towns, and railroad tracks) and dead reckoning (a way of estimating one’s current track, groundspeed, and position based on earlier known positions). Only pilots highly skilled in these aviation techniques were chosen.

Containers designed to fit inside the bomb-bay were packed with materiel and released using the existing equipment. Agents and crated supplies were dropped by parachute through the opening (called Joe Holes) left by removal of the belly turret. The planes slowed to 125-150 miles per hour and dropped to 400-500 feet to make the delivery. 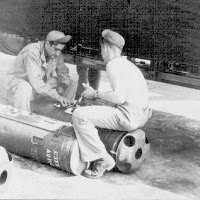 The drop area was typically identified by three high-powered flashlights placed in a row, with a fourth at a ninety-degree angle to indicate the direction of the drop. Imagine flying low enough to see flashlights on the ground!

After completing the drop, the pilots would continue flying into enemy territory to disguise the actual location should any enemy observers recognize the aircraft’s turning point as the drop point.
Operation Carpetbagger continued throughout 1944 until the end of the war, but their busiest month occurred in July 1944 when they dropped at least 4,680 containers, 2,909 packages, 1,378 bundles of leaflets, and 62 “Joes” (agents). By the end of the operation in May 1945, the Carpetbaggers had completed 1,860 missions, delivering 20,000 containers, 11,000 packages, and 1,000 airborne troops.

To get a first-hand account of this brave group, watch this YouTube interview with Bill Becker, a former Army Air Force Sergeant in the 492nd.

Linda Shenton Matchett is an author, speaker, and history geek. A native of Baltimore, Maryland, she was born a stone's throw from Fort McHenry (of Star Spangled Banner fame) and has lived in historic places all her life. Linda is a member of ACFW, RWA, and Sisters in Crime. She is a volunteer docent and archivist at the Wright Museum of WWII and a trustee for her local public library. To learn more about Linda and her books, visit her website. Sign up for her newsletter and receive a free short story, Love's Bloom.