Welcome to the Weekly Windup!

If you are a winner, please Contact Us with your email address to claim your prize. 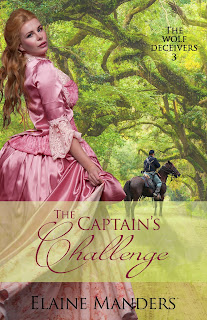 Gillian Carey has spent the last eight years studying music in England. During that time, the American civil war has claimed two brothers and her mother. Another brother is still missing. She returns to her Georgia home and a dangerous world with her family hiding secrets and her father a broken and brooding man. She turns to Alex Blaine, a union captain, rooming in her ancestral home, to find her missing brother, not realizing Alex is investigating her father for insurrection.
An army intelligence officer, Alex is on a dangerous assignment to identify anarchists responsible for the unrest in post-civil war Georgia, and all clues lead to Gillian’s father. Alex is attracted to the spirited redhead, but he has secrets of his own other than his army mission. He may have been responsible for her missing brother’s death.
As Alex races against time to expose an enemy bent on starting another war, Gillian is torn between her loyalty to her family and her growing love for the handsome captain. Is he worthy of her trust, or will he betray her as others have?

Check it out on Amazon

Be sure to leave comments throughout the week to get your name in the drawing. Giveaway ends October 21st. Winner will be announced in the October 22nd edition of the Weekly Windup.


Coming up this week: