Out of the Ordinary by Jen Turano 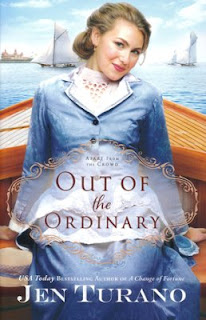 Miss Gertrude Cadwalader hoped her position as the paid companion to Mrs. Davenport would be easy. But as she becomes acquainted with her employer, she realizes the wealthy Mrs. Davenport has a strange tendency to be a bit light-fingered with other people's trinkets. Gertrude is relieved when Mrs. Davenport decides to have a quiet summer away from the social scene--until the woman changes her mind in order to help a young socialite launch into society. When Gertrude is caught in the act of trying to return one of the trinkets by Mrs. Sinclair, the mother of shipping magnate Harrison Sinclair, the woman jumps to an unfortunate conclusion. Harrison is determined to mend fences with Miss Cadwalader, but he's unprepared for the escapades a friendship with her will entail.

The romance of Gertrude and Harrison started in a prior book. Out of the Ordinary begins at a ball where the two are in attendance and the romance continues, simmering under the surface. Everyone can tell the two care deeply for one another, except Gertrude is convinced Harrison only likes her as a friend and Harrison doesn't think he wants a romance with anyone, which makes for great romantic tension.

I highly recommend picking up your copy of Out of the Ordinary by Jen Turano today!
Posted by Heidi Main at 12:00 AM