Women of the MTC 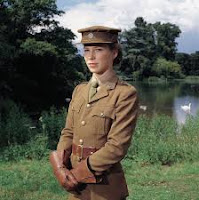 One of my favorite BBC television shows is Foyle’s War, a series about a Hastings Detective Chief Inspector who would rather be serving in WWII than investigating crimes on the South Coast. His driver is Samantha Stewart, a transfer from the Mechanized Transport Corp. (There are no records of an MTC individual serving a police force.) 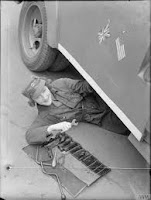 The MTC was a British women’s, civilian, uniformed organization that provided drivers for the government and other organizations. Founded in 1939 by a Mrs. G.M. Cooke, it was initially a volunteer organization. The Ministry of War Transport took it over in 1940, and its members were conscripted and received pay. Reports indicate that the group was organized so that women who could only work part-time because of family commitments could “do their bit” for the war. By 1943, there were over 3,000 individuals serving in the MTC within England and abroad.

The women were also expected to be able to keep the cars functioning, so underwent a rigorous three weeks training course that included vehicle maintenance, map reading, driving and breakdown procedures, convoy driving (don’t you just follow the vehicle in front of you?), driver duties, vehicle inspection, and security. They were also required to learn about the use of stretchers and respirators because many of the women were used as ambulance drivers.

After the war, most of these women went back to their pre-war lives, never giving their MTC career another thought, never realizing the importance of their work or the skills they brought home with them.

Have you had any unusual career or volunteer experiences?

A freelance writer for over ten years, Linda Shenton Matchett writes historical fiction. Her novella Love’s Harvest is available on Amazon. She is currently seeking a publisher for her series about WWII war correspondent Ruth Brown. Visit her at www.LindaShentonMatchett.com


Don't forget to leave a comment to get your name in the drawing for  Dawn of Liberty by Amber Schamel! Winner announced in the Weekly Windup on July 18th. Check out all of our great prizes on the Prizes Galore page.
Posted by Linda Matchett at 1:00 AM