So excited to welcome Elaine Cooper onto the blog today. To start, here is a little about her:

Elaine Marie Cooper is the award-winning author of Fields of the Fatherless and Bethany’s Calendar. Book 1 of the Deer Run Saga (Road to Deer Run) released last December and Book 2 (Promise of Deer Run) releases June 16, 2016. It is available for pre-order at http://www.crossrivermedia.com/portfolio/promise-of-deer-run/gallery/fiction/
Saratoga Letters, a historical romantic suspense, releases on October 4 through Lighthouse Publishing of the Carolinas and Book 3 of the Deer Run Saga (Legacy of Deer Run) releases in December, 2016 through CrossRiver Media. All of her books will be available at Amazon on their release date.

You can connect with the author at her blog/ website at www.elainemariecooper.com

Welcome Elaine! We're so glad you could visit us today.

Thank you so much for having me as your guest, Angela!

We might as well delve right in. Can you tell us what made you decide to become a writer?

Becoming a writer seemed an inevitable path for someone who always wanted to express her inmost feelings in words. I began writing as a child but never thought it would be anything more than a hobby and for years, that’s all it was. When my children were young, I had an opportunity to start freelance writing for newspapers and then magazines. But in 2007, I felt a “calling” as it were, to write my first novel. Since then, I’ve written six novels. I suppose I will continue to write as long as I feel inspired.

We’ll hope that feeling doesn’t ever leave you…so we can hope for many more of your books to come. Where did the inspiration for your latest book come from?

The plot for “Promise of Deer Run” was inspired by my respect and admiration for the military, as well as my concern for soldiers coming back from war who suffer from Post Traumatic Stress Disorder (PTSD). PTSD has impacted soldiers in all wars even though we tend to associate the term with recent conflicts. I wanted to tell the story of a young Revolutionary War veteran who suffers from depression and withdrawal from society brought on by his terrible experiences in battle.

That was something that really drew me into your story. I felt for your hero and what he was going through and how much of his life it effected.
How does your faith and spirituality work in with your writing?

I try to weave Christian beliefs into my story plots in as natural a manner as possible. Messages heard from a pulpit on the Sabbath, a prayer spoken in desperation, the love given to the unlovable, forgiveness…these are all ways that faith becomes an integral message in my novels.

Beautifully put, and beautifully written into your books!
What do you want readers to come away with after reading your books?

I don’t try to downplay the difficulties in life—we all know that our lives can carry many sorrows. But I emphasize that there is hope in faith and that, by following Christ’s guidelines in Scripture, He can bring about healing in our hearts in even the worst of circumstances and the deepest of pain.

Amen. That is a great message!
What is one of your favorite scenes in Promise of Deer Run?

It’s hard to choose just one! I think that—without giving away any spoilers—the scene at the corn husking when Nathaniel is given an unexpected opportunity. ;)

J I have to agree that is a great scene! I love that one as well…and encourage readers to get your book so they can find out what that opportunity entails. ;)

What are you working on next?

I have two other books ready to release this year: “Saratoga Letters” in October and “Legacy of Deer Run” in December. That is the third book in the Deer Run Saga. I also have a children’s Christmas story that my agent is pitching to publishers. Plus a follow-up series to “Saratoga Letters” is in the planning. J

Looks like you have some great stuff going on, and I know I’m looking forward to those coming books! Thank you so much for being with us!

I am so honored to be your guest, Angela! Thanks so much for your invitation!

Promise of Deer Run Back Cover Copy
The year is 1790. 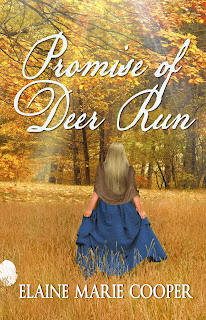 The American Revolution is long since over, yet the battles still live in the hearts of the survivors.
One young veteran is haunted by the painful memories of war. He still awaits a father who has never returned from battle and feels the sting of betrayal from a former love. He withdraws into his own world, clinging to one hope: Perhaps his father still lives.
Only one person in Deer Run seems to understand him: Nineteen-year-old Sarah Thomsen, who feels a kinship with the loner veteran. She senses the wounds in his spirit as much as she struggles to bury her own traumatic memories of war. And the veteran’s search for his father touches a chord of empathy in Sarah, as she feels the loss of a father she never knew.
While the couple begins to find hope in a mutual affection, others determine to destroy it. Slander and misunderstandings ignite a fire of doubt and mistrust, destroying whatever faith they had in each other.

Can two souls longing for healing and trust love again? Can faith—and a family—be restored?