Born into slavery in North Carolina in 1851, twins Millie and Christine
McCoy were joined at the lower spine. Immediately, they became the subject
of intense fascination. When only two years old, the sisters were already
part of a traveling exhibit, taking part in circus sideshows and fairs. P.
T. Barnum put them on display in New York. By the time the twins were
young women, they’d learned to sing and converse in several languages and
could play piano duets. They became the toast of Europe. Queen Victoria
presenting them with matching diamond hair clips after meeting them in a
private audience.


I write a lot of historical fiction—even my contemporary suspense novels
are heavily embroidered with historical personalities and circumstances—so
I am always looking for unusual biographies and memoirs to read and glean
interesting historical tidbits from. This book I discovered quite
accidentally and was instantly intrigued by the title. I quickly became
immersed in the touching account of the lives of the extraordinary McCoy
sisters. The author Joanne Martell presents the sisters’ story in an
almost loving way, careful to point to examples of their individuality and
humanity rather than treating them as mere freaks of nature.

The McCoy sisters were talented, modest, and gracious. They were tolerant
of the curious crowds and pushy physicians intent on examining their
deformity. Careful with their accumulated fortune, they gave generously to
schools and churches in their later years. Following the Civil War, they
bought land for their now-free family members and the white family that
once owned them as slaves. 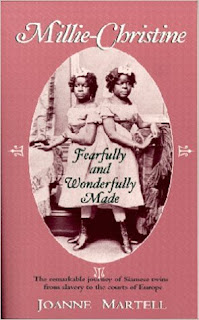 The sisters accepted Christ as their Savior and took an active role in the conversion of their friends and family members. In later years, they
especially enjoyed entertaining on Sunday afternoons after church on the
large front porch of their North Carolina home. Their story is an
inspiring one, and I heartily recommend it.

Shirley Raye Redmond has written a number of novels for women as well as
nonfiction children’s books. Visit her website at
www.shirleyrayeredmond.com She loves to hear from readers.