Have you ever made a craft or some other DIY that went awry? Ever sewn your skirt to the tablecloth or burned the carpet with an iron? No? Well then, you're an exception to the rule. :)

Howdy y'all! Crystal here and today we're tattling on our best (or should that be worst? lol) DIY mistakes. Hope you get a kick out of these and stick around for today's giveaway.

Here goes. Tell us, what is the worst mistake you've made on a craft/DIY project?


Shirley Raye Redmond: When my husband and I first got married more than 40 years ago, we invited other students in married student housing (we were in college) to come for Thanksgiving dinner. I prepared the turkey, but forget to take out the packet of giblets stuffed inside. Imagine my embarrassment when they were discovered later as we were carving up the last of the meat. One Nigerian student declared, "Ah, is this another delightful American custom?"

Elaine Manders: I've made many mistakes doing crafts, but this is the most recent. This year I got into sewing historical dresses for photo shoots. Those can be tricky, with details you wouldn't imagine would make a difference. See how I've folded the pleats in the side of this overskirt? The image of the pattern may be too small to show it, but the pleats should be folded the other way. If not, the skirt won't drape across the front correctly. Glad I noticed this before I sewed the front to the back, or worse, when the model put the dress on.

Linda Yezak: When we first moved into our current home--built and decorated in the '60s (shudder)--I vowed that the first thing to go would be the wall paper in the master bathroom. Picture it: Hideous green, pathetic red, and sickly yellow in vertical stripes. I wince just thinking about it. I watched a show on the DIY network about stripping wallpaper, and the host made it look so easy. Perforate the paper with this special little duber you can get at the paint store. Spray it down with something else you can get at the paint store. Wait a few minutes, and pull it off. Easy peasy. So, I went to the paint store, got what I needed, and set to work. Perforate, spray, wait, and pull. And bits of the plasterboard came off with it. I must not have done it right, so I tried it again. Perforated harder, sprayed more, waited longer, and pulled. And bits of the plasterboard came off with it. I tried a variety of times in a variety of ways, with the same results. The husband came home and found me, frustrated and still at it. "When you saw it wasn't working, why didn't you just quit?" I resorted to the whiny, tearful response I always used as a child. "I don't know."

Josette Downey: Not backing up a manuscript. I lost a big part of a novel.

Amber Schamel: Fortunately, I haven't made any huge mistakes. But I have started over many times. Probably the worst mistake I've made was to sew something on backwards or wrong side out, or cut it the wrong size and have to scap it and start over. So frustrating. Lol.

Catherine Castle: The worst mistake I've made on a craft was using fiberfill batting instead of lower loft cotton batting on a king-size quilt. The quilt wouldn't fit under my presser foot. I had to hand stitch the quilt and am having to hand stitch the remaining borders. It's taking me YEARS to work on this quilt. Lessons learned- always use low loft batting and never make another king-size quilt. Here's a photo of the only part of this quilt I've finished. I call it Red Sails in the Sunset. Oh, and did I mention it was supposed to be a wedding gift? The couple's only daughter recently graduated from college. I'm thinking about turning the project into a throw so I can get it off my plate. Sigh.

Jodie Wolfe: My worst craft mistake occurred as a young girl while working on a project for Latin class. I was embroidering a tablecloth with the various gods and goddesses and stood up, ready to take a break only to find I had attached the tablecloth to my skirt. LOL.

Linda Matchett: The worst DIY project I ever made was a sweater for my husband. I had never knit, but many of my co-workers did and would bring their knitting to lunch. I decided to tackle a sweater. The pattern was beautiful, complete with cabling (yeah, let's make our first-ever project with a difficult pattern!) Anyway, I followed the directions to the letter, and it looked great. However, I didn't measure my husband (it was going to be a Christmas gift), and the arms on the sweater would have been too long for Magilla Gorilla! (also not memorialized on film!)

Carole Brown: Does cooking count? It should! :) I was newly married and determined that my husband would never starve and always have a delicious meal waiting for him at dinner time. One evening, rolling up sleeves figuratively speaking, I mixed flour, shortening and milk together, rolled the dough out and cut it into fat biscuits, then slid those lovely looking biscuits into the oven. To my horror, my attempt went down in the Brown history as even too hard for the dog to eat. We laugh about it now (and I even made some tasty biscuits this week), but I’m sure it made a dent in my confidence. Why else would I find myself wondering each time I slip a pan in the oven: “Rock hard?” or “Golden brown and flaky good?”

Norma Gail: I am notorious for not being good with numbers. I bought fabric to recover some chairs and bought 3 times as much as I needed. When my husband saw the huge amount of fabric he knew I had done something wrong and helped me figure out what was wrong. I was very fortunate that it was most of a bolt of fabric and the store took it back.

Deb Garland: I knitted a scarf with chenille yarn, using a loose stitch pattern. Chenille is the French word for caterpillar whose fur the yarn is supposed to resemble. The result? Loops of various sizes drooped like noodles from the knitted fabric. I unraveled the scarf to start over, but reduced half of the fuzzy yarn to a threadbare state. An expensive mistake in terms of time and money. Know thy yarn and patterns!

Heidi Main:Okay, when I first read this weeks question I could not think of a thing to share! Oh, I do crafts, but I usually investigate them so thoroughly that I don't make any huge blunders. So I thought I'd tell about the time that I made a seat cushion for a bay window and was SO far off in my measurements that I couldn't squeeze the foam into the fabric casing. Bummer. Had to repurchase the fabric and start over, and it didn't look that great when I finished, but at least the foam fit! That seemed like the best story to share, until this morning. We purchased a new area carpet for our family room last night. One side wasn't laying flat, even after a night with heavy books weighing it down. Well, I remembered after we moved heavy furniture in our last home I would apply steam from an iron on the carpet dents and the fibers would perk back up. So, I got my iron out and started steaming. Here is the result:
Yup, this carpet is apparently synthetic and I MELTED the fibers. On a brand new carpet. Brand new. Oh. My. Goodness. What was I going to do? After freaking out and then googling, I decided I'd have to shave off the top of the carpet with some sharp scissors. It took awhile, but I was able to remove the melted parts and it looks as good as new! I could not for the life of me recreate the angle that I took the original photo from, probably because when I took THAT photo I was hopping up and down and wondering what to do with this hot mess. But suffice it to say, this is the same area, just with the top shaved off. Looks as good as new, right? Oh, that's right, the carpet IS new! I mean, I purchased it yesterday new. Think anybody will notice? Like hubby?! So, there you go. BIG craft blunder. It was scary, but I am thrilled with the results!


Jennifer Fromke: Worst mistake I made on a DIY project? Decided to paint our first master bedroom dark blue. Like, navy. We bought one can of paint, covered the walls and when the paint dried, it was ELECTRIC blue! We did a little research and realized the paint was intended to go on in layers. Four coats were required for the desired depth of color. Our budget covered 2 coats. We stretched it to three, but the bedroom was very blue. Final result was not as bright as that first coat, but nowhere near as dark as we had intended. :-)

Peggy Wirgau: I’ve always liked DIY projects but I’ve made plenty of mistakes along the way. Once I glued hundreds of shells onto the frame of a mirror. Either I didn’t use the right glue or didn’t wait long enough to hang it, but every single shell fell off by the next day. Another time I used latex paint over oil-based paint on our bathroom cabinet, so most of the new paint peeled off. And when I was 10 or 11, my mom enrolled me in sewing lessons. At the first lesson, the thread jammed the machine I was using and it broke the needle. The instructor turned red and started yelling at me. My mom got a refund and took me out that afternoon to buy a pattern and fabric so she could teach me herself. :)

Susan Craft: The worst mistake I ever made on a craft project was making a pumpkin costume for my son when he was 4. I made it out of paper Mache, but used too many layers. By the time I got through with it, it weighed about 20 pounds and was so awkward my son couldn’t sit down or get up without assistance. 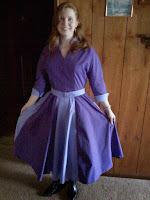 Terri Wangard: The sewing machine and I never became friends. The seam ripper and I are very good friends. I was making a top, years ago, and it seems like every seam had to be redone. Funny thing is, I still have that top, the only garment in my closet sewn by me.

Crystal L Barnes: Hmm, worst mistake...I know I've made some.... The most recent one I can recall is sewing the cuff on my dress backwards. I still haven't fixed it. No one at church seems to notice though. :)

Thanks for sticking around, y'all. We hope you've enjoyed a few laughs or learned a few lessons from our mishaps.

Share with us what you've learned or laughed over, maybe even tattle on yourself in the comments below and you're name'll be added into the pot for either a kindle or print copy of Carole Brown's WWII Romantic Suspense, With Music in their Hearts.

(The winner will be announced in Monday's Weekly Wind-up post so be sure to check back.)