Mission trips to Cornwall, England, led me to the discover one of my favorite English foods, the Cornish pasty. From residents in St. Ives, I learned the turnovers were often made with two equal-sized fillings in one pasty: a savory meat mixture and an apple pie mixture—making a full meal. Although its origin is unclear, 14th century cookbooks included recipes for a variety of pasties.

In the late 18th century, when Cornwall’s miners sought employment overseas, they spread the popularity of their traditional food to the United States, Canada, Australia, Mexico, New Zealand, South Africa, and Brazil. These workers enjoyed a hearty meal with minimal fuss, and so can you! 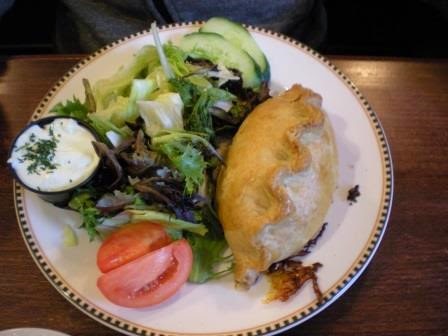 Set oven to 400º F. Make the pastry and divide into 4 equal pieces. Roll each piece into rounds 7” diameter. Cut up potatoes into small, irregular shaped pieces, similarly the swede (and onion if used). Cut the beef into small cubes about 1/4", removing all fat. On each round of pastry put a share of vegetables and add salt and pepper to taste. Then add the meat and a knob of butter and another sprinkle of pepper. Dampen the edges of the pastry and bring up from both sides with floured hands to envelope the filling. Pinch the edges together and crimp firmly to seal. Cook on a floured tray for 3/4 hour. Makes 4 pasties. (recipe from Favourite Cornish Recipes, compiled by June Kittow)

Note: I prefer to use lean ground beef, substituting peas for rutabagas, and using a sweet onion. I serve the pasties plain or with gravy. Some of the recipe’s clarifications are mine. If you’d like to learn more about Cornish pasties, visit http://www.cornishpastyassociation.co.uk/.

If you've heard of Cornish Pasties, made one, or have suggestions on variations of this English meal, I'd enjoy hearing them.

Leave a comment below to get your name in the drawing for The Healer's Touch by Stitches author Amber Schamel! Check the Weekly Windup on the 18th to see if you're the winner.