I have very few “stand out” memories of my life as an adolescent. However, my father has lots of vivid memories from his childhood even though he was only ten years old at the end of WWII.

Despite being thousands of miles away, WWII impacted everyone in the US, including children. My dad had a paper route and talks about the maps and diagrams that regularly took up much of the The Baltimore Sun's front page. As a result he has a prodigious wealth of knowledge about geography. He can pinpoint even the most obscure islands halfway across the world.

No matter their age, children were asked to personally do their bit. They collected scrap metal and rubber for weapons, purchased war bonds and acted as plane spotters They knitted socks and scarves for soldiers and worked in victory gardens. 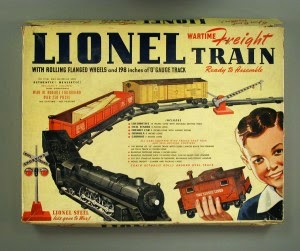 The war affected childrens' toys. Many toy factories were converted to manufacturing war materials and suspended toy production during the war. Therefore, there were fewer toys on the market. Other manufacturers began to produce items previously made of metal in wood or cardboard.

Armed forces and nursing uniforms were popular as were toy soldiers and associated tanks, jeeps and guns. One food manufacturer produced a board game called The Supermarket Game. The central object of the game was to go to the store for mother. Specific instructions for individual squares on the course of the trek include “Forgot 1 item, go back to store” and “Forgot what to get, go back home.” Comics such as Little Orphan Annie, Superman, and Captain Midnight urged youngsters to help the country win the war. Even coloring books had war themes such as pilots or planes.

The war lasted for over six years, and children grew up before their time as rationing, deprivation, fear and loss colored their lives. Were you a child of the war? What do you remember?

A freelance writer for over ten years, Linda Matchett also writes historical fiction. She is currently seeking a publisher for her series about war correspondent Ruth Brown. www.lindashentonmatchett.com