Hello! I hope you are having a fantastic Friday!
Anyone that knows me knows that I love guns. The bigger the better. The bigger the gun the better I shoot as well. Here’s one I shot during Recoil Therapy last summer. 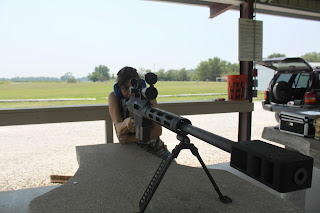 I saw an amazing cannon ball used on Pirates of the Caribbean and wanted to know if it was in fact a real weapon. So I did a little research. I found out it was indeed a real weapon fired from cannons. Nothing unusual about a weapon that works, no matter how cool it is.

It was the story about a variation of the weapon that caught my eye.

It is rumored in around 1862 a dentist named John Gililand invented a double barreled cannon and had it cast in Georgia. It was designed to shoot two cannonballs connected by a chain like the one I saw in Pirates of the Caribbean. But with it being a double barreled it was supposed to shoot simultaneously…in theory at least.

He set out to test it’s accuracy. The invention was a dismal failure.

The first firing plowed up some ground, tore up someone’s cornfield, and cut down some saplings before the chain broke sending the balls in different directions. All this due to small imperfections in the casting and uneven firing temperatures in the barrels.

The second firing the chain cut through a thicket of pine. Thankfully that was what it was aimed at but it is not said what happened to the cannonballs that were supposed to go with the chain.

But like a father who will not admit fault in his offspring, Gilleland considered the test-firings a success and set out to sell his invention to the Confederate Army. After promoting it to several leaders, he couldn’t find anyone interested and it ended up being used as a signal gun to alert that the Northerners were approaching.

Even in that it failed being used once in a false alarm and then disappearing.

It was found about 10 years later under a pile of rocks and now resides in front of the City Hall in Athens.

There is much to be said about tenacity.

If you think this one is fun, you should see some of the ideas they cooked up during WWI and WWII.

So what is the most amusing or fun weapon inventions or stories you know of?


(Even if it’s Uncle Clay shooting a 12 gauge shot gun without being properly braced and tripping over the chairs in the shooting range….well you get the idea.) Share with me. I love fun gun stories.