It was not until after Lee Miller’s death, that her only child Anthony Penrose discovered 60,000 prints, negatives, and articles in the attic of her home. He knew nothing of that segment of her life, and as a result, collected many of the items into a book entitled The Lives of Lee Miller. An apt title because of the number of careers Lee held.

She had a difficult and somewhat odd childhood. Raped by a family friend when she was only seven years old, she modeled in the nude for her father’s amateur photography business. Leaving home, she traveled to New York to study art, but was discovered by Vogue founder, Conde Nast, who saved her life when she stepped off the curb into oncoming traffic. Captivated by her beauty, he offered her a contract to model for him, and a star was born. She became one of New York’s top models.

Eventually growing bored of the modeling life, she traveled to Paris and joined the surrealism movement and did some more modeling. It was during the time period that she tried her hand at photography, perhaps remembering her father’s hobby. Her work was quite good, and she received recognition for her work. Several years later she returned to New York and set up a studio where out of which she did portrait and commercial photography.

More years past, and she once again headed to Europe where she settled in London. It wasn’t long before she was caught in the midst of WWII. Knowing opportunity when she saw it, she managed to obtain accreditation through the U.S. Government as a journalist for Conde Nast Publications (Vogue Magazine) as one of the 127 accredited female correspondents. 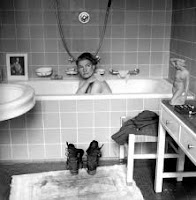 Famous for a picture of herself bathing in Hitler’s bathtub, Miller had a keen eye behind the lens. She sent hundreds of photos back to the magazine during the Blitz and from all over war-torn England. Because of miscommunication, she arrived in Paris before it was liberated, and as a result, was confined by the Allied command until the Germans retreated. Toward the end of the war, she managed to make her way to Dachau where she captured pictures of the camp’s liberation. Most of her photos were gritty and grim, but it was important to her that American’s understand the scope of war.

Lee Miller had come a long way from being the face of Vogue.

As they say, a picture is worth a thousand words. What is your favorite famous photograph?

A freelance writer for over ten years, Linda Shenton Matchett is the author of several romance novellas. Under Fire, the first in her trilogy about WWII war correspondent/amateur sleuth Ruth Brown was released in July by eLectio Publishing and is also available on Amazon or from your favorite bookstore. Visit Linda at www.LindaShentonMatchett.com.
Posted by Linda Matchett at 1:30 AM