Who doesn’t love Dr. Seuss? Many of us grew up with his delightful children’s book. Some of us still read them as adults. In fact, I received his Oh, the Places You’ll Go when I graduated with my Masters degree. But like everyone during WWII, he did his bit for the war.

Born in 1904, Theodor Seuss Geisel attended Dartmouth College and the University of Oxford. He left Oxford to become an illustrator for the well-known magazines of the time, such as Vanity Fair and Life. He published his first children’s book in 1937 under the pseudonym Dr. Seuss.

Then the war came, and he would not publish another children’s book for seven years. 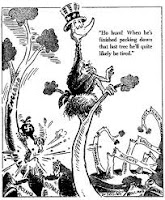 First, he joined the staff of the newspaper tabloid, PM, in January 1941, as editorial cartoonist where he produced over 400 political cartoons. He worked for the paper for nearly two years before joining the Army. He was given the rank of Captain and attached to Frank Capra’s wartime documentary film unit. His job was to write and direct films that focused on GI morals and morale. By 1944 he had been shipped out to Europe.

While on a military police escort, he went across the border to Bastogne. That night the Germans attacked. The Battle of the Bulge began, and Ted found himself ten miles behind enemy lines. It took the British three days to find and rescue him. He returned to his unit and continued to produce films. In 1947, Design for Death won an Academy Award for Best Documentary Feature.

After the war, Theodor returned to writing children’s books, and he published over sixty during the course of his career. Many of them have been adapted to television specials and series, feature films, and a Broadway Musical.

His birthday, March 2, has been adopted as the annual National Read Across America Day, an initiative on reading created by the National Education Association. How appropriate is that?

What is your favorite Dr. Seuss book?

A freelance writer for over ten years, Linda Shenton Matchett writes historical fiction. Her novella Love’s Harvest is available on Amazon. She is currently seeking a publisher for her series about WWII war correspondent Ruth Brown. Visit her at www.LindaShentonMatchett.com

Posted by Linda Matchett at 1:00 AM