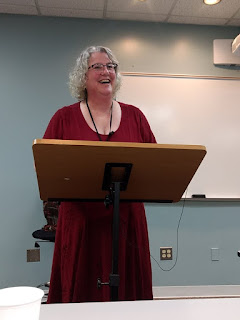 Pegg Thomas is an author and editor, but also a fiber artist of some *mumble* years. She raises sheep and spins their wool to create one-of-a-kind shawls and other useful items. While she mostly uses a modern-day production spinning wheel, she occasionally spins on a 200-year-old Great Wheel, a true piece of American history.
Pegg Thomas at 12:30 AM
Share